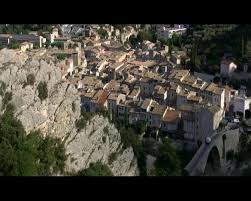 In 2008, Nyons has been rewarded with the “most beautiful detour” label joining in the meantime some others nearby towns as Vaison-la-Romaine, Crest, Pernes-les-Fontaines or Apt. All of those towns own the requirements of the association because :
They are far away from the main highways,
They own a historical heritage or historical monuments,
They organize original and quality events,

Nyons benefits from privileged weather conditions. Its large olive grove (European Northerner) reflects the Mediterranean character of the city. Protected from the rigorous mistral due to its location, the city also enjoys an exceptional rate of sunshine, mild winters and hot summers days tempered by the Pontias (a breeze that only blows around 10 am and 10pm.)
Due to the orientation and the nature of the soil, a diversified flora makes the Nyonsais settings with the olive tree as a major symbol. Indeed, the variety “tanche” has earned the first AOC for olive and oil in France. The vineyards products (Côtes du Rhône) complete the appeal of Nyons, forever nicknamed “the little Nice”

The Roman Bridge (which celebrated in 2009 its 600th anniversary) the old town, its feudal castle, the Doctor Bourdongle place (won a trophy of the urban planning in 2006 after its renovation) and the Saint Vincent church constitute the keystone of an historical heritage which holds a particular attention on the behalf of the municipal team.Also let us underline the exceptional quality of the local products of Nyons. They received the AOC labels (Protected Designation of Origin) in their category such as olive, vineyard and wines. On Thursday mornings, the town center and its place witness the installation of the traditionnal and weekly market (which started around the Middle-Ages)
From June to Septembre, the provencal market take reign on Sunday mornings and they always attract a large audience.

To satisfy your love of nature, you can also find thematic walking trails and “Le jardin des Arômes”

Over the seasons, typical events pace the Nyonsais calendar. Add a beautiful mild climate to the combination and it will fully justify its “Petit Nice” and “Most beautiful detour in France” designations. These affirmations won’t fail to remind you of the Barjavel quote: “The difference between Nyons and Paradise, is that in Nyons, you are very much alive”